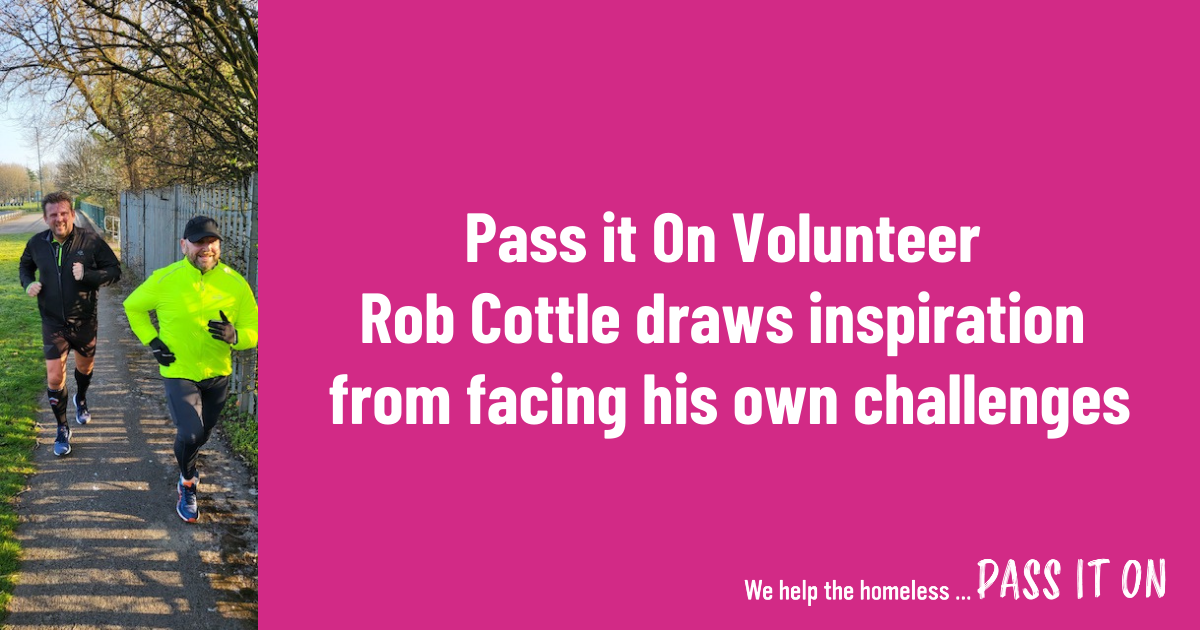 Pass it On Volunteer Rob Cottle draws inspiration from facing his own challenges.

Sometimes it’s our own adversities and that inspire us to help others. For by coming  through them  we gain a fresh perspective on how difficult it must be for those who have similar problems but lack the support that we previously took for granted.

After a serious health scare, Pass It On volunteer, Rob Cottle, had  just such a realisation. Now on the road to recovery, he’s more determined than ever to help others in need.

Here Rob, the deputy night manager at Smiths news in Birmingham tells his story and explains why he’s now raising money for others.

‘At Christmas in 2020 I was admitted to hospital with what I thought was kidney stones but turned out to be pneumonia, Covid19  and type 2 diabetes!  After 11 lonely and terrified days I was able to return home to my beautiful wife and family—but sadly, that was just the beginning….’

Lacking energy  and in a great deal of pain, Rob says he couldn’t have run a bath let alone a marathon. ‘For the next few months just walking to the kitchen put me out of breath and going outside meant using a wheelchair.’  Unfortunately, Rob had developed Long Covid, causing him to lose over 6 stones and be off work for almost as many months.

‘The joy of returning to work was almost overwhelming,’ says Rob who has 12 years’ service with the company. ‘It’s only when things go wrong that we realise the importance of our family, friends and colleagues—there’s no way I would have made it through without them.’  Rob explains that still gets out of breath and that everyday tasks can often be a physical challenge.  ‘But imagine if I’d been homeless or not had the access to health and workplace support – it doesn’t bear thinking about’

Inspired by his own recovery, Rob has now started running, with 2 of this works colleagues, Chris Shuttleworth and Wayne Foster entering this year’s Birmingham half marathon in May.  ‘It might seem crazy to be running 13 miles when I sometimes struggle to walk but in truth, I feel so lucky and am determined to help those less fortunate than me.’  Rob, Chris and Wayne will all participate on Sunday 1st May and the Pass It On steerco will be there to cheer him on!

To spearhead his fundraising, Rob is raising money via the Pass It On Just Giving page https://link.justgiving.com/v1/charity/donate/charityId/3039130?tipScheme=TipJar2.1&reference=givingcheckout_tj21

with all donations clearly going to Pass it On.  He explains that ‘Raising £1000 would be enough to provide 50 sleeping bags plus almost 30 care rucksacks containing all the essentials for homeless and vulnerable people — so every donation makes a real difference.’

If you’re inspired Rob’s story and would like to support his efforts. please give generously.

‘It’s a huge inspiration to know that each step I take will help someone else.’ says Rob.

We at Pass It On say that Rob is a huge inspiration too.

If you have a challenge that you’d like to complete on behalf of Pass It On then get in touch and we’ll be delighted to help you with advice on fundraising and publicity.  Together we can make a greater difference!